In anticipation for Wednesday’s release of Pixar’s 16th film, “The Good Dinosaur”, we felt the need to write about our 10 favorite Pixar films.

We wanted to be positive here and not discuss our dislike for certain Pixar films, such Cars 1 & 2.

Today is a celebration of ten films we find meaningful, essential, and entertaining to people of all ages.

That’s the magic of Pixar. There is no age requirement to be moved by their films.

Let’s start with number ten, which is not a bad film, it’s just not up to par with the other nine we find more essential. 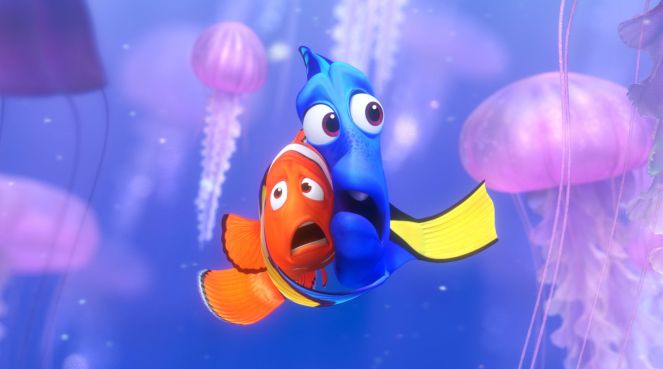 Before you take out the pitchforks and chase us out of town, let us state for the second time that this isn’t a bad film.

It’s just not nearly as groundbreaking as it was when it came out almost 15 years ago.

Finding Nemo is a fun little story, filled with eccentric characters, such as Ellen Degeneres’ Dory, and wears it’s heart on it’s sleeve. We still hum “Just keep swimming”, to this day.

Sadly, it’s biggest sin is that it’s not as great as most of Pixar’s catalogue.

The story isn’t very complex and it becomes almost annoyingly sentimental when Dory keeps getting emotional and Marlin starts turning into Mr. Scrooge.

The characters say what’s on their mind most of the time without the actions speaking for themselves and the humor borders on low brow more often than not.

We still care deeply for Finding Nemo, it just didn’t age as well as it’s animation.

I was personally insistent on A Bugs Life being amongst the top ten pixar films.

I’m aware some people count it towards the bottom of their filmography but for me this is essential Pixar.

The film’s first half that focuses on the bumbling but well meaning Flic trying to hire warriors to defend his village is hysterical.

But it’s the second half of the film that shifts to pure adventure that makes it such a precise one two punch.

Way back in 1995 when the first Toy Story was released, everyone was basically crapping their pants in excitement because it was the first fully computer generated film.

The first Toy Story is so near and dear to my heart I didn’t think a sequel could ever live up to it.

Toy Story 2 is one of those rare sequels that is arguably even better than the first.

Taking the rescue aspect of the first film and spinning into what is essentially an animated version of Saving Private Ryan.

It’s fascinating, action packed, and furthers the characters and world of the original film while also feeling distinctly unique.

What’s even crazier is how the series went on to top itself again with a third installment and the trilogy now sits as one of the absolute best in cinema history. Animated or otherwise.

First and foremost what makes Inside Out work on an immediate level is it’s emotional resonance.

This is something Pixar is known for so after two relatively lame experiences (Cars 2, Brave), it was a pleasant hit to the heart that Inside Out had such strong emotions working.

What’s important to focus on, is how the story is being told, which I think is one of the most innovative ways in a long while.

It tackles the subject of emotions, particularly sadness, so head on that I found myself forgetting I was watching a “kids movie”

I like to think that Joy, Anger, Sadness, Disgust and Fear aren’t so much characters, as they are aspects of Riley.

She is the central focus and this film is an intensive character study.

But rarely has this journey been so literal and so in depth.

You know those movies that you can’t watch on an empty stomach because by the end the food within the film causes the realization your stomach is an empty pit?

Well Ratatouille may be the only animated film that ever had this effect on me.

It’s similar to 2014’s wonderful little foodie film Chef. Though this offers up a bit more originality and that signature Pixar charm. We follow Remy, an aspiring and talented young character whose only stopping block to the career of his dreams is that he’s a rat.

It’s a wonderful film about following your dream no matter who or what stands in your way.

Of all the Pixar characters, aside from Andy in Toy Story, I would say I connect with Remy most.

At least in terms of doing whatever it takes to pursue my dream. 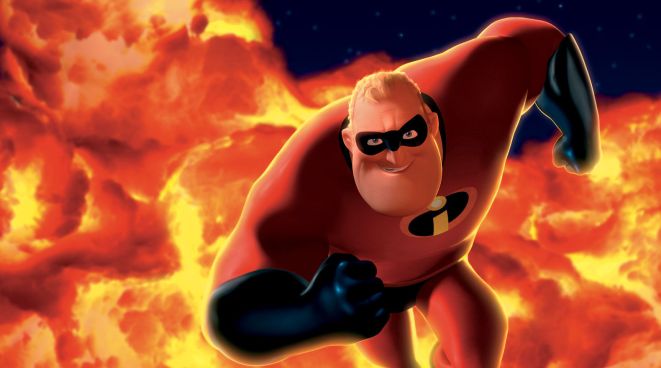 Right now we are in the midst of superhero mania, for better and worse. On the plus side we get a few each year. On the bad side the quality of the genre has gotten a little stagnant.

Way back over a decade ago, we got one of the finest superhero films in history. One that puts most of the stuff releasing now to shame. It didn’t come from Marvel or DC.

It came from Pixar and it’s the incredible… The Incredibles.

A superhero action comedy that broke the barriers down of what the genre could be and who it could appeal too.

Everyone I know loves this film, it’s probably the one superhero film next to The Dark Knight that everyone agrees is great. Even though it’s been over a decade, we are finally getting a sequel to a film that helped solidify Pixar’s already stellar reputation.

Of all the films Pixar has made, this is one of the most subversive and entertaining.

We cannot wait for The Incredibles 2. 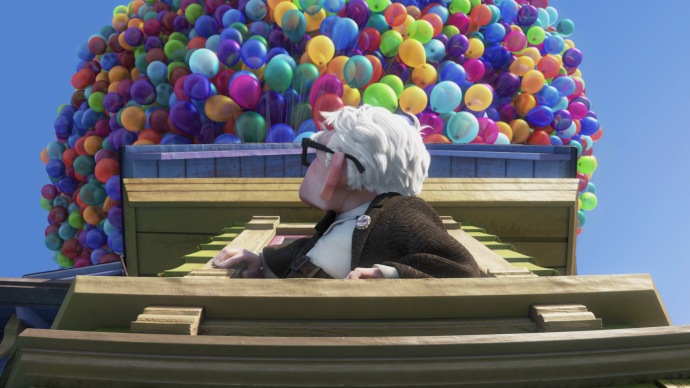 We cannot talk about UP without discussing the famous opening scene.

Well, it was the first time Pixar had manage to make us cry before the film even hit the 10 minute mark.

The opening is a love story that is told though Michael Giacchino’s Oscar Winning score and Pixar’s heart achingly whimsical animation.

We see Carl and Ellie’s love story go from happy to sad, back to uplifting and finally…ends in the most heartbreaking way imaginable.

A tear still forms in my eye when I see it.

Thankfully the rest of the film is filled with Pixar’s signature warmth and creativity and makes a film about an Old Man using balloons to escape his reality…into something so beautiful and poignant.

A special shout out for also including an original take on the talking dog clichè.

The character, Dug, is hilarious and his scenes with Carl and Russell still put a big smile on my face. 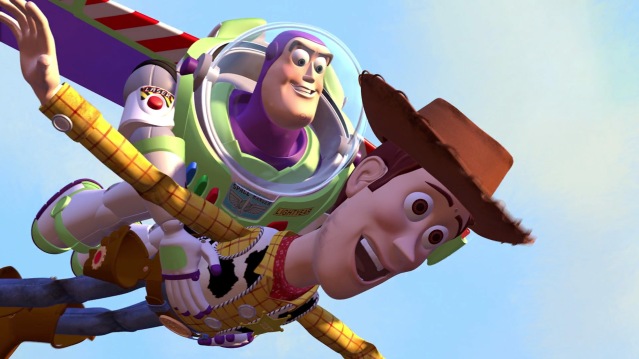 All those things were said when Toy Story was released twenty years ago and they are still valid to this day.

This is a movie about childhood, jealousy, love, and acceptance. These mature themes told through the guise of a “kid’s movie” is something Pixar did perfectly right off the bat.

I love this movie and each time I watch it I find new things to like about it and remember all the old things I had forgotten.

Toy Story makes you recall all the imagination you had when you were a child and makes you reminisce about all that time spent alone, creating worlds, characters, and stories.

The film is also about self discovery.

Especially when Buzz Lightyear discovers who he really is. That scene cemented the fact that Pixar had more on it’s mind than trying to entertain children.

They wanted you to experience all the emotions these characters are going through and it’s still part of their filmmaking formula.

I will never get over how emotional their films make me and it all started with toys.

How brilliant is that?

Who knew Pixar was going to be responsible for one of the best love stories ever told? Oh and this love story was between two robots.

Wall-E and Eve’s love story makes me want to fall in love. It’s so real and best of all, we can’t imagine what their lives would be like without each other.

What works so wonderfully about Wall-E is that we are constantly engaged with everything happening on screen. From Wall-E aimlessly going through the American wasteland to the pulse pound chase through space near the end, the film is a fest for the eyes..and the ears.

Seriously, the film’s vision of the future, where we are all lazy, fat, and addicted to technology, doesn’t seem that far fetched anymore… 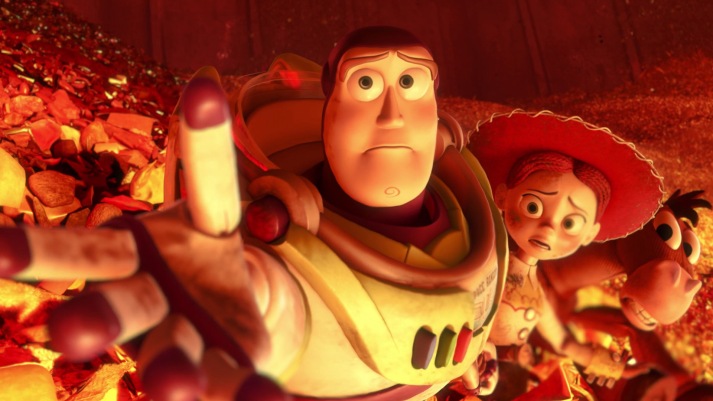 Yes this is number one.

We know that isn’t a big surprise but at the time it came out, it was the biggest surprise of the year.

In 2010, there was this growing notion that Pixar could do no wrong and that they would have to strike out sooner or later.  What was going to end their 15 year winning streak?

All eyes were aimed at Toy Story 3.

I for one thought it was going to be unnecessary and worst of all, ruin the legacy of the first two entries.

Boy was I wrong.

Toy Story 3 is pure perfection. The fact that it tackles mortality told through the eyes of toys who no longer feel needed, was a thing of beauty. The icing on the cake was the last twenty minutes.

The incinerator scene is in my top 10 favorite scenes of all time. It’s daring, emotional, and best of all, earned.

When each toy held hands, awaiting what they thought was their demise, every moment from the franchise felt like it came together in an unexpected and tear inducing way.

They are saved of course and I thought I was going to be saved from more tears.

Yet again, Pixar proved me wrong.

After the scene ended, we were treated to the perfect ending. We had a chance to say goodbye and to see the toys we loved so much, be loved again. It was sad yet hopeful.

It truly was, the loveliest goodbye.

Let’s hope Toy Story 4 is half as good as this and here’s hoping that The Good Dinosaur continues to honor the Pixar name.

All images provided by Disney•Pixar