I fancy myself somewhat of a horror buff, so it came as a surprise that a mainstream horror film like The Darkness managed to creep up into theaters without me realizing it.

The Darkness seems like one of those scripts that looked good on paper but once it finished filming, Blumhouse Productions realized just how similar it was to the last five possession films they released and decided to just silently roll it out.

After viewing the film, it’s not at all a surprise. 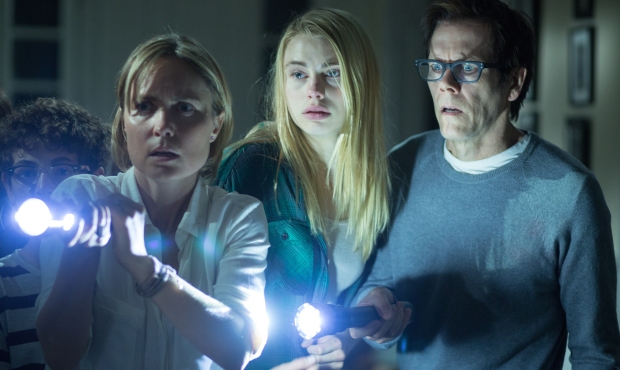 Currently rocking a 0% on Rotten Tomatoes, the film hasn’t fared well at all with critics.  But it’s not so much that The Darkness is even bad, or poorly made, or acted. It’s just that it’s been done 100 times over with stronger scripts and better directors.

The basic premise and by extension, the opening scene, aren’t all that bad.

The Taylor family, your typical white suburban populace types, take a vacation into the Grand Canyon with some family friends. The opening thankfully doesn’t try to throw in any lame jump scares and instead focuses on setting up the basic character personas and situations.

To be fair, Michael isn’t so much creepy as he is weird. He seems to be suffering from some kind of autism but I don’t remember them going into any true detail about his condition.

During the Grand Canyon vacation, Mikey falls into an ancient chamber where he decides to bring home 5 oddly marked stones in front of a creepy painting. Of course it’s only creepy to us because we know this is a horror film.

However, the way it’s handled in the opening scene, while ominous, does make sense in that it would probably catch the interest of this young and odd kid.

Unfortunately once you make it pass the opening scene, things start to take a turn for the worse.

Director Greg McClean, whose best known for his Wolf Creek films, makes a dire mistake in relocating us to an uninteresting house in the suburbs. Gone is the sparse and lovely scenery of the desert, that really set this movie apart.

Despite my general disliking for the Wolf Creek films, I can’t deny that McClean has a strong eye for outdoor visuals, and limiting himself to the confines of a generic 2 story house always seen in horror movies, moves things in the wrong direction.

Aside from the generic story beats, which I can forgive if done effectively, the movie makes some odd characterizations and decides to sell itself short on characters in favor of jump scares and by the numbers plot movement.

For instance, several things are hinted at within the family without every being properly explored, which may have lent itself well to juicing up the films already bare bones themes.

Some of these things include the daughters aforementioned bulimia, which is used as a little more than a catalyst for a night’s worth of chaos. It’s only brought up for a scene or two before it’s completely forgotten about and we’re left with nothing but eye rolls.

Another plot thread which started early on was the hinting’s of Peter’s infidelities. Again, something that could have been explored deeper and used to push the stories mythos of self destruction forward.

Even a main theme of  what it’s like to deal with a child who has autism seems to get completely brushed over for the quick shadows in the night or the pop ups behind doors.

What we have here is a classic case of director’s and studio’s playing things safe, which is sad.

In horror, you should take risks and at no point do they seem eager to be ambitious.

I don’t want to completely write the film off because it does have it’s moments of genuine interest and I was never exactly pissed off at the film.  It’s just that we’ve seen too many of these films in the past 5 years and technical proficiency simply doesn’t cut it anymore.

★★ Safe and generic despite good production values, The Darkness is another stale entry in the ever growing possession genre.