Call Me By Your Name is a very conflicting movie.

On one hand, it has some of the most iconic scenes of the year such as; Armie Hammer dancing to Love My Way, the juicy peach scene, and a kiss that HAS to win the MTV movie award for best kiss.

On the other hand….it doesn’t pack an emotional punch until the very end and the beginning of the film feels far more coy and uninvolving than it should.

Set in Italy during the summer of ‘83, we are gifted with never-ending sights of greens and short shorts.

Right on the cusp of adulthood, Elio spends his summer reading, playing piano, and giving up his room for college students that come there to help his father  with research.

His summer gets more interesting when the strinkigly handsome Oliver arrives and his desire for him grows with each passing day.

Timothee Chalamet will most likely be Oscar nominated for his turn as Elio. Although I felt the writing was lacking on his character, I believed he understood every ounce of his character. He rarely ever missses a beat.

The way he uses his eyes to convey his thoughts stay with you long after the credits roll.

Michael Stuhlberg gives a lovely supporting performance as Elio’s father and cements the fact that he’s one of the greatest character actors of our time.

His closing monologue is one for the ages and I cannot wait to watch it a billion times when it comes out of theatres.

I’m still not 100% sold on Armie Hammer’s casting but he acts well with vulnerable bravado as the elusive yet exciting Oliver.

The cinematography is imperfect, but that’s the point. It’s not a clear cut time in Elio’s life and the camera mirrors his personality and his meandering summer.

However, It plays fast and lose with time yet drags when it needed urgency.

Luca Guadagnino’s direction is divisive here. Not because it’s bad, it’s actually quite good, but he goes from sumptuous voyeur to uninterested lingerer far too often.

One moment we’re watching a sexually tense moment of Elio and Oliver sitting by  water and the next we’re boringly next to Elio doing nothing.

Characters doing nothing doesn’t have to feel boring; Richard Linklater & Jim Jarmusch have proven that so many times.

I’m a fan of subtlety but this one takes the cake for being too shy to go into any kind of detail at times.

The attraction the two have for each other almost makes no sense in the beginning because we never truly see the discovery of that spark.

I tried not to make comparisons to the book while viewing the film, but it’s a shame they decided to ditch Elio’s highly conflicted (and passionate) narration. It would not only have added in much needed information but could’ve been this generation’s Brief Encounter.

The highly sexual & interesting edge the book has is gone. What we’re left with isn’t bad though.

Once the film gets to the payoff of all the tension, we’re finally able to see a more interesting side to the characters.

As Oliver and Elio become more and more vulnerable, Armie Hammer and Timothee use body language to sublime effect to show us how  they’re feeling. I forgave them for not using the narration because of those moments. 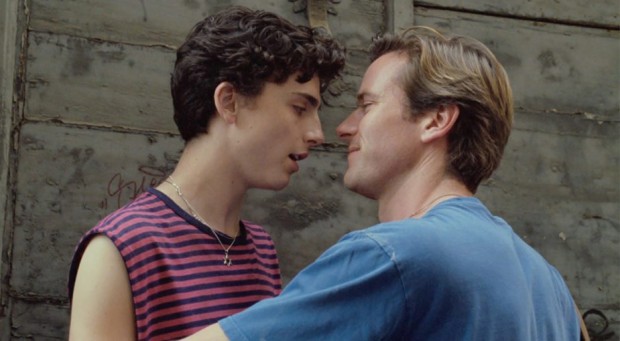 If it wasn’t for Timothee and Armie’s smoldering chemistry, I don’t see how I could’ve cared for most of the film.

What keeps the film from fading my psyche is how they use this film to explore depths of their talent.

Armie Hammer sadly doesn’t get roles like this, and to see him embrace the film’s bolder moments is a sight to see, especially during the soon to be famous peach scene.

After being put on the sidelines as Matthew McConaughey‘s neglected son in Interstellar, Timothee takes the spotlight here and never lets go.

★★★ ½ An uneven but ultimately satisfying look at love and desire.