It’s been months since I’ve seen The Miseducation of Cameron Post.

I wanted to write about it, but the words never seemed to come out and soon my mind wandered and it started to camp out in the back of my mind.

These thoughts about the film stayed locked away until I saw Suspiria on Halloween night.

Don’t worry I’m not insinuating a hyper grim and disturbing horror film set in post war Berlin is the same as a film about a young woman being sent to conversion therapy against her will.

But they do share a very distinct similarity, Chloë Grace Moretz will blow you away the moment she arrives on screen.

There’s an inherent vulnerability in her performance in Cameron Post; One that makes you want to hug her and tell her everything will be ok and makes you believe that she will presevere.

I’ve been a fan of Chloë Grace Moretz since her snarky turn in 500 Days of Summer, which turns ten years old next year, and her subtle and broken performance in the unfairly forgotten Let Me In.

It’s sad, but when DiCaprio kept doing solid work for decades, it made Oscar voters think “Well he was good, but he wasn’t as GREAT as the other people who broke out of their comfort zones.”

Even in Neighbors 2, I felt she was good but it reminded me of a lot of her other performances.  Misunderstood Teen? Check.  Rebellious nature? Check.  Her swearing around nerdy/everyman characters? Check. A couple of scenes of her showing her sad? Check.

I was starting to become hyper critical of her work and when I heard she was going to be in the highly celebrated LGBTQ novel, The Miseducation of Cameron Post, I foolishly thought it would be another movie where I would wouldn’t be lost in her performance and be reminded that I was watching a movie.

Well Chloë Grace Moretz, I want to apologize from the bottom of my heart.

As I mentioned before, there’s an inherent vulnerability to her, which harkens back to the days of the 70’s when trained actors put their heart and soul into each frame without (or rarely) over-acting.

She reminded me of a 70s Pacino in here, before he was a screaming meme, he was a wide eyed innocent guy from New York with a fury behind his eyes and a soft spoken voice. 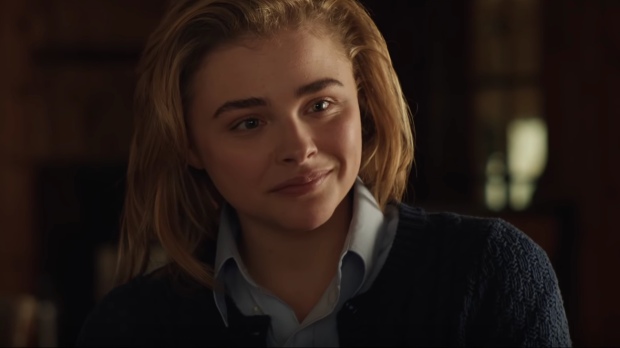 I felt it the moment she was caught in the car kissing her best friend.  Before they are caught, we are stuck in this moment of two young women in love.

It’s a school dance and they both are there with their respected boyfriends.  It’s a seemingly normal hetero night.

It’s not until they sneak off to a car on school grounds do we get to see the first glimpse of what moves our protagonist.

Grace Moretz looks to her friend with a puppy dog innocence but we the audience are trapped in her gaze.  We feel like this a moment of release and passion.

When her boyfriend finds them in the car, we are left in a moment of shame.  Not because the movie is telling us so (we are shown the religious upbringing of her character in a slight montage in the beginning) but Grace Moretz is ashamed, scared, and doesn’t know what to do.

The look of a puppy is now slightly tweaked into a person who has lost everything.  It’s not her puppy dog stare that sells the moment, it’s her body language turning from passionate surrender to clinched fear that sells it.

After that scene cut to black, I turned to my friend next to me and said, “Wow. Like seriously, oh my god.” I don’t like talking during movies but I broke my rule to praise Grace Moretz’s acting.

Throughout the film she’s constantly outshining everyone around her, from her far off gazes to her internalized anger that’s turns into a quiet sadness that seems impossible to cure.

I still think about the way she interacts with others during the group therapy sessions, constantly observing but seen as defiant by the people in charge because she refuses to corner herself (and sexuality).

I’m proclaiming The Miseducation of Cameron Post is not only a crucial film for everyone, but one that shows that Chloë Grace Moretz is one of the best actors working today.